Sexual Harassment On The Job

Do you have nude pictures in your workplace? Tell dirty jokes? Make suggestive remarks to other employees? If you answered yes to any of these questions you may be guilty of sexual harassment.

Sexual Harassment is an issue that is covered by the same federal law that protects us from sexual discrimination. 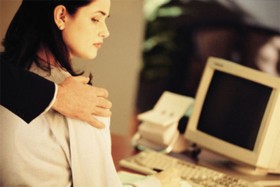 In today’s society the number of sexual harassment cases is rapidly rising. What seemed like a harmless action to some individuals may lead to grounds for suspension, termination, and even lawsuits. It is difficult to determine the false accusations of sexual harassment which can end up costing your company greatly.

To discriminate against a person is to deny them rights, benefits, wages, or opportunities because that person belongs to a certain group. Sexual harassment is defined as:


Basically, sexual harassment is any inappropriate and unwelcome behavior with a sexual overtone that causes a negative affect on a person’s work environment. Examples of sexual harassment, if carried out in the workplace include:


We usually think of an injury as a traumatic event resulting in broken bones, or blood gushing from open wounds. People also suffer injuries that have no outwardly observable signs.

These are psychological injuries which can be just as devastating, disabling and scarring as any visible injury. Victims of sexual harassment often suffer from embarrassment, loss of reputation, fear of retaliation, criticism, blame, loss of their jobs, stress, low productivity, absenteeism, and low morale.

Some behaviors may not seem offensive in your view, but they may be offensive to others.