FRIDAY, Aug. 14 (HealthDay News) — Students returning to school this year have another worry besides homework and lunchroom bullies: swine flu. 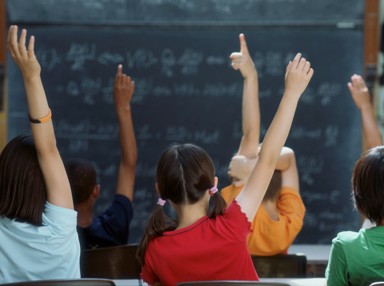 Experts say parents and kids need to act early and vigorously to reduce their risk of contracting the H1N1 virus.

“We do know that [the virus] is going to strike the school-age child and it’s primarily because they’re in crowded classrooms with lots of other children and have a better chance of spreading germs,” said Sharon A. Wilkerson, dean and professor of the Texas A&M Health Science Center College of Nursing in College Station. “Parents need to pay attention earlier and more urgently. We’re still seeing cases of swine flu and I think we’re going to see an increase with the start of the school year.”

“We’re giving advice with a new conviction,” added Dr. Michael Spigarelli, assistant professor of pediatrics and internal medicine at Cincinnati Children’s Hospital Medical Center. “The common perception is that kids are going to get sick and a certain amount of getting sick is how the immune system builds itself up. We’re saying that this flu season may be potentially worse.”

According to the U.S. Centers for Disease Control and Prevention, more than 55 million students and 7 million staffers head to the nation’s 130,000 schools each weekday during the school year. As always, the first line of protection will be good hygiene.

If soap and water aren’t readily available, make sure your child has hand sanitizers in their backpack, along with other school supplies. Washing or sanitizing should take place before every meal and every snack, even if it’s just cookies in the classroom. “We’ve just got to drill that into children,” Wilkerson said.

Finally, “if you cough, cough into your arm or use tissues,” Beeber stressed.

Children who are sick should be kept home, especially if they’re running flu-like symptoms such as high fever, vomiting or diarrhea, Wilkerson said. They should also be kept away from other children.

In back-to-school recommendations issued Aug. 7, the CDC advised that schools set aside a room for people developing flu-like symptoms while they wait to go home and that surgical masks be used for ill students or staff and those caring for them.

Any child who has been sick should be fever-free for at least 24 hours (without the aid of medications) before returning to school, Beeber added.

Widespread school closures that swept across the United States last spring needn’t be repeated this fall, the CDC has said.

“I don’t think that we’re going to see that panicky reaction,” according to Wilkerson.

But the CDC guidelines noted that everything could change if the outbreak suddenly turns severe. In those cases, the agency said, some schools may need to be closed, and certain precautions — for example, spacing school desks farther apart — might need to be imposed.

Immunization could also be of great help, the experts noted. Children should be vaccinated for the regular, seasonal flu as soon as a vaccine is available, which hopefully will be earlier than the usual October-November time frame.

Trials involving about 2,800 people are also underway for an H1N1 flu vaccine, with officials hoping to have 160 million doses available starting in mid-October. “The vaccine will most likely, at least for children, require two doses separated by about three weeks or more,” CDC director Dr. Thomas R. Frieden told reporters last Friday.

The antiviral drugs Tamiflu and Relenza are also available to help people who come down with influenza but, according to a recent study in the BMJ, they may not prevent complications in children with seasonal flu. This raises the question of whether they would help protect kids from the swine flu, either.

The good news is that the swine flu does not seem to be worsening in severity, even as it winds its way through the Southern Hemisphere.

“We haven’t seen the evidence that it’s the most lethal thing we’ve seen since 1918 [the Spanish flu pandemic],” said Spigarelli. “We haven’t seen it get terribly bad in the Southern Hemisphere. We’re not seeing elementary schools being wiped out because of the swine flu.”