— Is Your Business Prepared for a Flu Pandemic?

Avian Influenza or H5N1 is one of the few avian influenza viruses to have crossed the species barrier to infect humans. H5N1 has caused the largest number of detected cases of severe disease and death in humans. In the current outbreaks in Asia and Europe, more than half of those infected with the H5N1 virus have died. Most cases have occurred in previously healthy children and young adults. However, it is possible that the only cases currently being reported are those in the most severely ill people, and that the full range of illness caused by the H5N1 virus has not yet been defined. 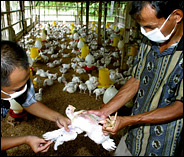 So far, the spread of H5N1 virus from person to person has been limited and has not continued beyond one person. Nonetheless, because all influenza viruses have the ability to change, scientists are concerned that H5N1 virus one day could be able to infect humans and spread easily from one person to another.

Because these viruses do not commonly infect humans, there is little or no immune protection against them in the human population. If H5N1 virus were to gain the capacity to spread easily from person to person, a pandemic (worldwide outbreak of disease) could begin. No one can predict when a pandemic might occur. However, experts from around the world are watching the H5N1 situation very closely and are preparing for the possibility that the virus may mutate and begin to spread more easily and widely from person to person.

Should a pandemic occur, have you made a business contingency plan? Experts say that as many as 40% of employees could be sick at one time. Will your suppliers be able to deliver goods? What about services that they have outsourced – are they going to be reliable?

Governments around the world have spent billions of dollars preparing for a pandemic; buying medicines, running disaster exercises, trying to develop strategies for border control. However, what if companies can’t continue to provide vital services such as banking, airline service or food services. A study by Deloitte & Touche said out of 100 executives surveyed in the U.S., 2/3 had not yet prepared or assigned anyone to be in charge of designing a plan for an Avian Flu eventuality.

In contrast, businesses in Southeast Asia have made more headway, as they had to deal with SARS in 2003. The SARS outbreak, which could be considered small, had a devastating effect nearly bring commerce in Hong Kong to a stand still. According to the American Chamber of Commerce in Hong Kong, they say that almost all businesses there have some kind of Avian Flu plan in place. 60% of the companies have a plan that could be in place immediately. Some of the plans include working from multiple sites and for employees to work out of their homes to help prevent the spread of the disease. In Singapore during the SARS outbreak, many businesses required temperature checks prior to allowing someone on premises.

An Avian Flu outbreak in any part of the world could have dramatic results in the global supply chain. In today’s business model, where inventories are managed in real-time, this could affect every business right down to your neighborhood grocery store. One begins to realize the importance of advanced planning when thought of in these terms.

What can you do? Some methods to help prevent the spread of flu include canceling face-to-face meetings in favor of teleconferencing; installing germ-killing hand washes in offices and make sure to cover coughs.

The department of Health and Human Services in conjunction with the Center for Disease Control have put together an Influenza Pandemic check list for large businesses.